Our county, state and country is all part of a Representative Constitutional Republic empowered by elected representatives at all levels, via a democratic election process from segments of equal population. The following shall be in accord with Article II, Section 15 of the Washington State Constitution, the Revised Code of Washington (RCW), the bylaws of the Skagit County Republican Party (SCRP), the bylaws of the Washington State Republican Party (WSRP) and the rules and guidelines of Republican National Committee (RNC).

The County Party: The Skagit County Republican Party "Central Committee" is comprised of all Skagit elected and appointed PCO's and Precinct Captains. Meetings are held at noon on the last Saturday of each month. Every two years at the County Organizational Meeting PCO's elect the County Officers; Chairman, Vice Chairman, State Committeeman and State Committeewoman (all officers must be of opposite sexes). The officers lead & represent the SCRP on the State Committee as voting members. Of note: Skagit County is the 11th most populous county in the state.

The PCO: The Precinct Committee Officer (PCO) is the official representative of the voting precinct to the Republican Party. There is one Republican PCO allowed per precinct. The PCO is an elected or appointed official and is responsible to the voters within the precinct that he or she lives in or has been appointed to. PCO's and Precinct Captains make up the SCRP Central Committee and are the grassroots of the GOP.

The Voting Precinct: In Skagit County we have 121 voting precincts, each precinct is a specified geographic area (territorial subdivision for electing members) and is the starting point or the basic building block of the SCRP and WSRP political units. In the political party structure, Republican members working at the local precinct level connect the precincts to the county and state-level organizations.

The County Districts: In Skagit County we are part of two of the nine state Congressional Districts (CD's), CD #1 & CD #2 and three of the states 49 Legislative Districts (LD's), LD #10, LD #39 and LD #40. Additionally, Skagit County encompasses three Commissioner Districts, #1, #2, and #3.  Also the city municipalities of Mount Vernon, Anacortes, Sedro-Woolley and Burlington use "Wards" of equal population for government representation.

The State Party: There are 39 counties in Washington State and each of the counties has three voting members; a Chairman, Committeeman and a Committeewoman, which total 117 members statewide who are authorized to vote at the Washington State Republican Party State Committee meetings. Every two years at the State Organizational Meeting the County Officers elect a State Chairman, Committeeman and Committeewoman that represent the WSRP at the National Level.  These three individuals are part of the 168 total members which comprise the Republican National Committee (RNC).

PCO & Precinct Captain Activities: Each PCO & Precinct Captain is encouraged to attend all Central Committee meetings. PCO's & Precinct Captains help to set strategy and policy for the Skagit County Republican Party including voting on important issues. We campaign for and help to elect and keep good "common sense" Republicans in local, state, and national offices. We help to "get the vote out " for the precincts, coordinate Republican functions and recruit, work with and train new members and volunteers.

PCO Eligibility & Elections (RCW 29 A 80.041 & RCW 29 A. 80.051): Must be a member of the SCRP and a registered voter in the precinct. Must file for election in even numbered years (if unopposed the PCO Candidate is automatically elected, if opposed whoever receives the most votes in the August Primary is elected) and serve a two year term beginning December 1st following the election.

PCO & Precinct Captain Appointments (RCW 29 A .28.071): Appointments for open precincts must be made after the County Organizational Meeting and before the November General Election in even numbered years. The new PCO or Precinct Captain must be a registered voter in the county and must be a member of the SCRP, also requires approval via a majority vote at a SCRP Central Committee meeting.

Republican Precinct Caucuses: Coordinating and participating in GOP Precinct Caucuses are also important PCO and Precinct Captain functions. Precinct caucuses are held every four years in the individual Precinct District Areas, (also know as "Political Subdivisions"). These caucuses are where the resident voters meet to discuss many important Republican business issues including choosing the most preferred Presidential candidates and electing Delegates and Alternates to the County Convention. 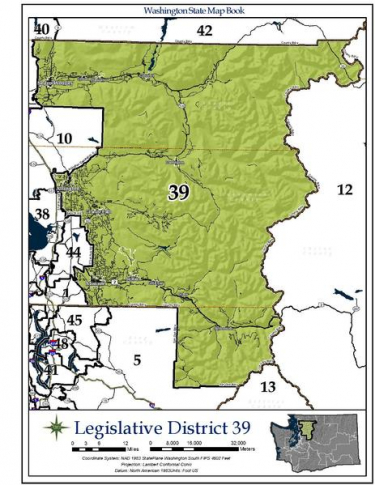