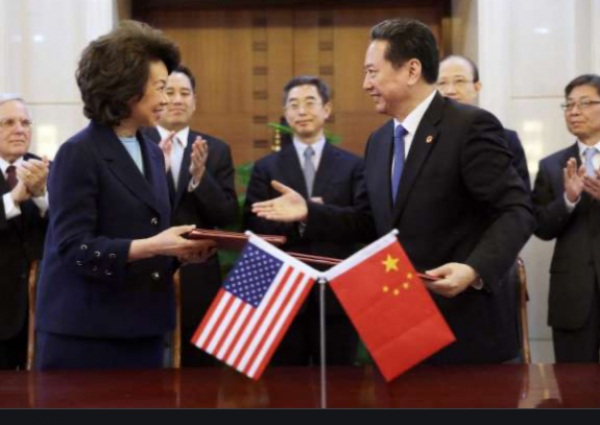 Looks like Elaine Chao, married to crooked Mitch McConnell has been up to no good too. She is now under investigation to benefit herself or her family’s shipping company. Guess where Chao’s family’s shipped in and out most of their materials to? That’s right, China! Another damn crooked family in bed with China. McConnell and Chao aren’t a surprise. No wonder her husband, Mitch McConnell is so eager to get Biden installed into office.

The House Oversight Committee said Monday it is investigating whether Transportation Secretary Elaine Chao acted improperly to benefit herself or her family’s shipping company.

Two Democratic leaders sent Chao a letter asking her to turn over documents and communications related to the New York-based company, Foremost Group. Chao’s father and sisters own the company, which transports material to and from China.

“Federal regulations prohibit federal employees from using their public offices for ‘the private gain of friends, relatives or persons with whom the employee is affiliated in a non-governmental capacity,’ ” the lawmakers wrote in a seven-page letter to Chao.

The New York Times and Politico have reported that Chao may have used her Cabinet position to benefit the company and increase its influence and status with the Chinese government. China has extended hundreds of millions of dollars in low-interest loans to the company for the purchase of foreign-flagged ships.