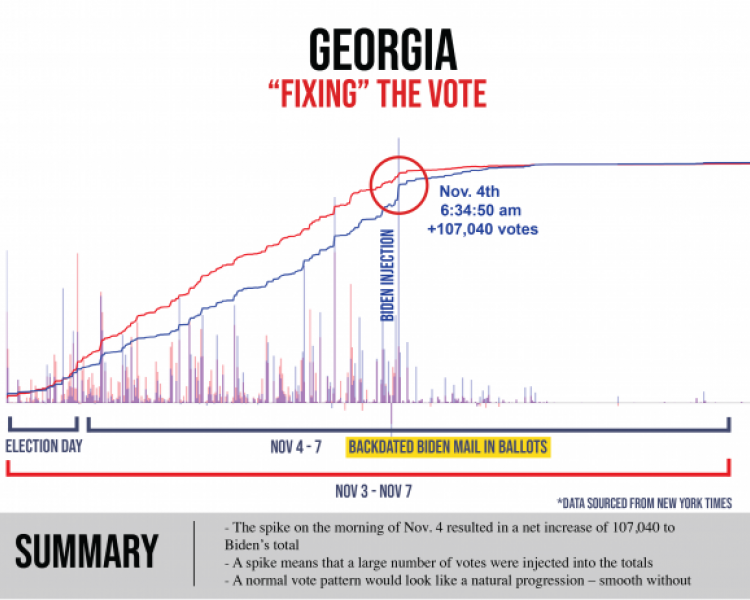 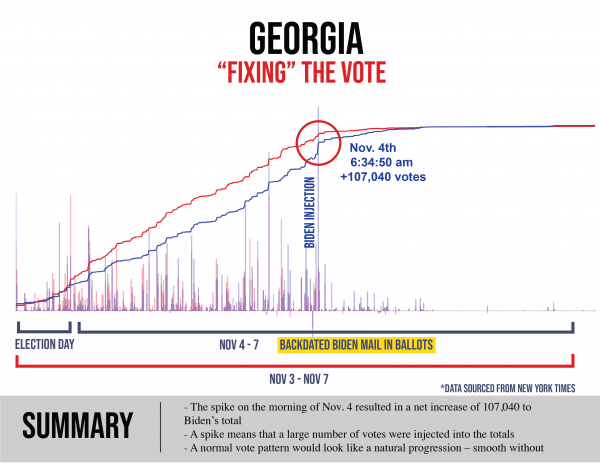 Are we approaching the day when former President Donald Trump will be vindicated for his claims that the election that robbed him of a second term was stolen?

That has yet to be seen. But he sure thinks the time is nearing, and — if an explosive report by a group that sued for access to dozens of batches of mail-in ballots in Fulton County, Georgia, is correct — Trump may at the very least be proven right about how messy the general election was in the Peach State’s largest county.

According to the group Voters Organized for Trusted Election Results in Georgia (VoterGA), one of the entities listed on a lawsuit challenging the results of the 2020 election in Fulton County, a hand audit from last year which has oft been pointed to as having “proven” now-President Joe Biden’s victory in the state, was “riddled with massive errors and provable fraud.”

The ballots the analysts reportedly examined were made public after the petitioners in the lawsuit won a court order on April 13 and VoterGA successfully petitioned the Georgia General Assembly to make images of the ballots public under an Open Records Request which began on March 25, according to the group’s news release.

“These inaccuracies are due to discrepancies in votes for Donald Trump, Joe Biden and total votes cast compared to their reported audit totals for respective batches. Thus, the error reporting rate in Fulton’s hand count audit is a whopping 60%,” the group stated in the news release (emphasis theirs).

The team said that out of the 36 batches of mail-in ballots, 4,255 extra votes were added to Fulton’s November audit results, including 3,390 extra for Biden, 865 for Trump, and 43 for Libertarian Party candidate Jo Jorgensen.

“But it is not simply a case of errors,” the release continued. “The VoterGA team found 7 falsified audit tally sheets containing fabricated vote totals for their respective batches. For example, a batch containing 60 ballot images for Joe Biden, 50 for Donald Trump was reported as 100 for Biden and 0 for Trump.”

VoterGA accused Fulton County of neglecting to include 100,000 tally sheets, over 50,000 of which were from mail-in ballots in the published results of the full hand recount of the Nov. 3, 2020, election, which was conducted by the Georgia Secretary of State’s office. These tally sheets were not produced by county officials until late February, VoterGA said.

In what has now become a familiar accusation against Fulton County officials, the group also said that dropbox transfer forms were conspicuously missing until produced following an Open Records Request, and that “missing forms are still needed to provide chain of custody proof for about 5,000 ballots.”

Its reported findings have been added to the lawsuit against Fulton County as “additional counts of how the Equal Protection and Due Process Constitutional rights of Georgia voters were violated.”

VoterGA’s reporting has not been independently verified by The Western Journal. However, if true, this data comes amid a circular firing squad in Georgia politics over the Fulton County recount and sundry allegations of fishiness.

On Thursday, Georgia Secretary of State Brad Raffensperger called for Fulton County election officials to be fired, following a report from The Atlanta Journal-Constitution that alleged 200 Fulton County ballots were double scanned before last year’s recount.

Meanwhile, Republican state Sen. Burt Jones called for Raffensperger to be investigated and to be made to testify before the Senate Government Oversight Committee.

Raffensperger and others still adamantly deny that anything that happened in Fulton County that would have influenced the outcome of the general election.

One thing is clear: Voters of all political persuasions would have good reason to doubt the integrity of Fulton County elections. Carter Jones, an independent monitor of the county’s elections, told The Journal-Constitution that its election officials are “so poor at managing the actual process that if they had actually tried to rig the election, they would have bungled it and we would have found out.”

This may certainly be the case, but also doesn’t discount that perhaps this notorious county’s elections are such a dumpster fire that if there was indeed deliberate fraud, how could anyone even tell? Citing sheer incompetence is a rather flimsy argument to dismiss the potential for fraud or outcome-influencing irregularities outright.

The news of VoterGA’s reported findings was celebrated by Trump, who declared the Fulton County recount to be “total fraud” and announced that the group’s analysis confirmed claims he has been making since last year.

“The news coming out of Georgia is beyond incredible. The hand recount in Fulton County was a total fraud! They stuffed the ballot box — and got caught. We will lose our Country if this is allowed to stand,” he wrote in a statement.

“Are we now in a Third World country? What else will they find once the full Forensic Audit takes place?” he asked.

Indeed, what else will they find if a forensic audit takes place? Is it possible that with this much smoke, there was really no fire?

Perhaps Biden won Fulton County, the whole state of Georgia and all his 306 Electoral College votes fair and square.

But at this point, at least in Fulton County, how are we even to know that this was the case? Are you comfortable writing the whole thing off as incompetence, or would you like to find out once and for all who really won in Fulton County — and the rest of the country, for that matter?

The American people deserve the transparent truth, whatever it may be. Truth and Accuracy.