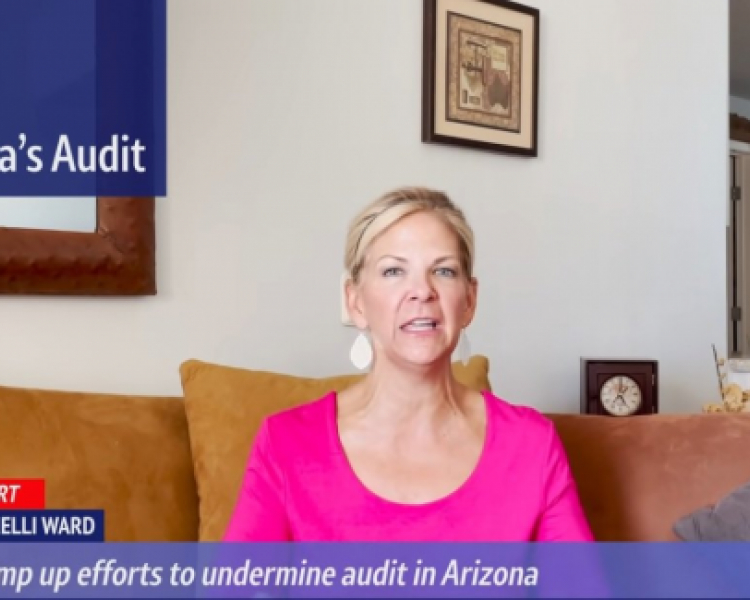 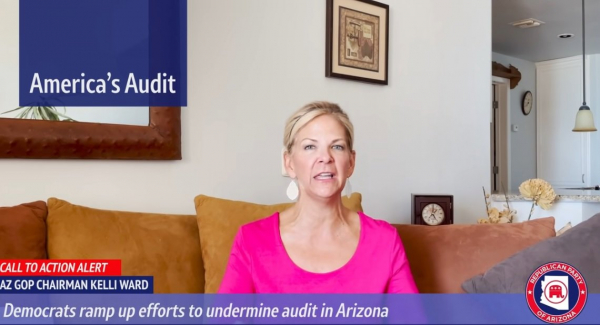 Arizona GOP Leader Kelli Ward is sounding the alarm.  Deep State players from Democrat Not-for-Profits (NFPs) were snuck onto the Maricopa County Audit these past couple of days.  They are as corrupt as their ‘non-biased’ NFPs are and have no business being on the audit floor.

We reported on Thursday that three far-left NFPs requested that the DOJ intervene on the audit in Arizona and stop it:

Of course, these entities are connected to George Soros and will do anything they can to prevent the 2020 election steal from being uncovered:

AZ GOP Chairwoman Kelli Ward issued a “Call to Action” asking for supporters to come together and protect the audit from Democrats who are trying to undermine or stop the process.  Ward said there were serious developments causing her to believe that “we are at a tipping point” and believes the audit to be in jeopardy.

She said a group of “experts”, (The Brennan Center and The Protect Democracy Group) wrote a letter asking the DOJ to send Federal monitors to “observe” the Arizona audit.  She describes them as “aggressive, dirty, back-room players” who work with BLM and Marxist groups intent on destroying our nation.

Ward said that through a court-pushed agreement between the parties, “Arizona Secretary of State (SoS), Democrat Hack Katie Hobbs” gained access to the audit floor for three representatives.  But now we have learned those “observers” monitoring the audit are not even from the SoS’s office. One is an “election consultant” with Protect Democracy, and the other is an attorney with The Brennan Center.  Not coincidental, it happens to be the same Washington groups who urged the Feds to “monitor” the audit.

The move undermines Arizona sovereignty to oversee and administer their own elections and sets a dangerous precedent by injecting the Fed-connected groups.

During the last hearing, the court ordered the parties to work together and come to an agreement about providing the SoS access to monitor the audit, which they did. Now it looks as though the SoS took advantage of an agreement that was seemingly made in good faith, by pulling a “bait and switch”.  Last week The Gateway Pundit posted the following statement regarding the audits:

As far as we are concerned at The Gateway Pundit election integrity is THE ONLY priority and the MAJOR ISSUE for America’s future.

It is vital that the AZ audit be completed as planned because the ability to conduct the audits necessary to prove this election was stolen may very well hinge on its success.  It is clear by the extraordinary measures taken to stop this audit that they know that which is sure to be found.

The reason it is called “America’s Audit” is because this may be the one and only peaceful path to uncover and restore the will of the people and save our great nation.

The AZ Senate must do everything in its power to fight the subversion of that which is right by the S.O.S. and the Maricopa County Board of Supervisors.  Here are some things the GOP should consider:

The GOP should consider seeking a T.R.O. to prevent the S.O.S. from injecting any person or entity who may be acting as an officer, agent or representative of the Federal Government onto the premises of the the Coliseum where the audit is being performed.

The GOP could sue these groups for claiming to be non-biased so they don’t have to pay taxes, while clearly showing their bias for the far-left.

SoS Hobbs could be sued for inviting NFP’s onto the audit floor which was not included in the agreement with the GOP.

The actions of the S.O.S. violate the spirit of the agreement and if allowed without protest could be considered acquiescing or agreeing to Federal intervention.

Here is the video from Ward:

The Democrats are very scared and will do anything to keep their stolen 2020 election hidden.