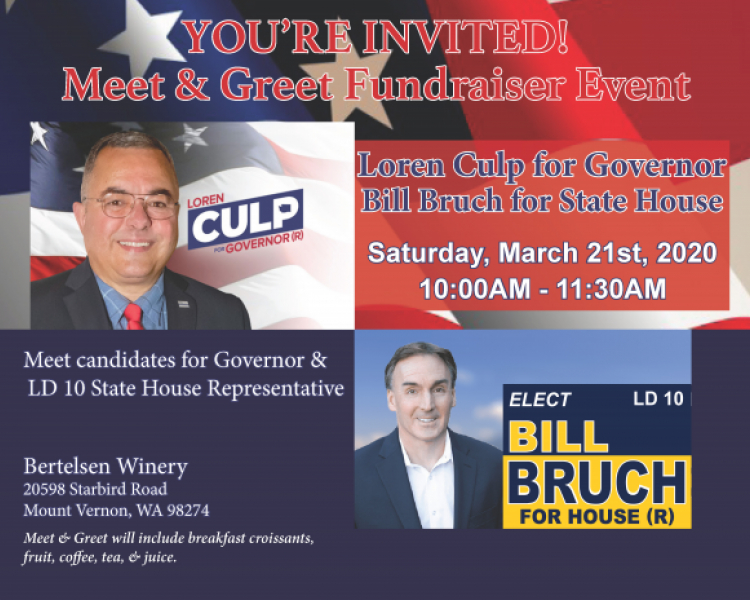 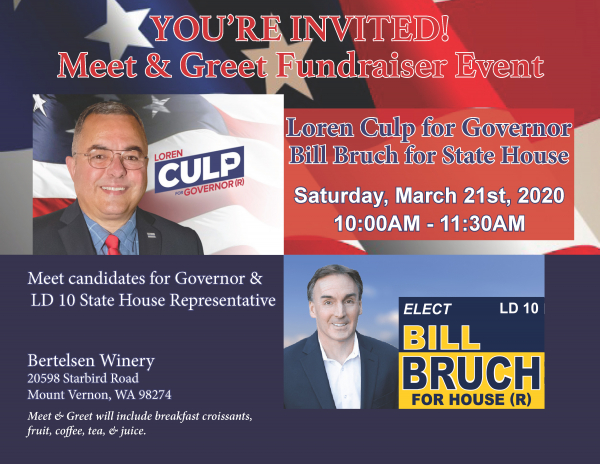 THIS EVENT HAS BEEN POSTPONED UNTIL FURTHER NOTICE

Event will be at the Bertelsen Winery, located at 20598 Starbird Rd, Mount Vernon MAP.  Includes breakfast croissants, fruit, coffee, tea & juice and plenty of time for Q & A.

In November of 2018, Loren Culp was the first Police Executive to take a stand against the gun restriction initiative I-1639 which he believes is unconstitutional.  The Washington State Constitution says, “The right of the individual citizen to bear arms in defense of himself or the state shall not be impaired”. The Declaration of Independence declares that governments are instituted to protect citizen’s rights.  It is this principle that guided Loren’s actions to say “No” to I1639. He said, "If we would have had police that stood by this principle to do what is right and protect citizen’s rights, as Loren did, Rosa Parks would not have been taken to jail and millions of Jews would not have been sent to their deaths."

This stance threw Loren into the public spotlight. Since then he has been speaking across the state to educate the citizens and elected leaders about the dangers of violating citizen’s rights no matter what the issue.  Some may have read his new book "American Cop" which will be available at the event.  Website Link.

Bill Bruch is a Republican candidate for Legislative District 10 State House, a former La Conner Town Councilmember, a Skagit County Property and Project Manager and Chairman of the Skagit County Republican Party.  Bill is seeking office because the excessive-taxation and over-regulation coming out of Olympia is hurting families and businesses. Bill is a proven local elected official who works well with both sides of the isle and will bring balance, transparency and accountability to the sate legislature.

"One-party state control continues to undermine and destroy the stability of Washington State, and things will only get worse if we don’t regain seats in the legislature to fight the current majority party’s big government tax and spend agenda.  As a State Representative, I will be working hard for the best interests of the people of the 10th Legislative District, our three counties, and the state."  Website Link.