Doug Logan, the CEO of Cyber Ninjas, presented to the Arizona Senate on Friday

Rumble — Sept 24, Steve Bannon War Room we discuss the breaking news with the AZ audit. Our guests are: Dr. Peter Navarro, Mark Finchem, AG Ken Paxton, Boris Epshteyn, Rudy Giuliani. Stay ahead of the censors - The forensic audit of Arizona’s Maricopa County has revealed thousands of discrepancies and issues along with a number of other serious election integrity problems.

Doug Logan, the CEO of Cyber Ninjas, the firm who led the forensic audit of Maricopa County’s 2020 election results, revealed serious problems with the ballot forms, votes, and others. Join us Video: Warroom.org

“57,734 ballots with serious issues were identified in the audit. These issues include improper voter registration, improper votes, and discrepancies in the registration. This is a conservative estimate, as there were other identified problems that were not quantified nor included in that total, likely resulting in a much larger number of flawed ballots. Additional issues identified: backdated registrations, multiple voter registrations linked to the same voter affidavit, voters without records in a commercial database, and printing defects rendering thousands of ballots as suspicious.

“In the history of democracies – from ancient Athens to today – ours was the most detailed,demanding, and uncompromising election audit that has ever been conducted,” opened Senate President Karen Fann, noting that auditors spent a combined more than 100,000 hours examining Maricopa County’s handling of the 2020 election. 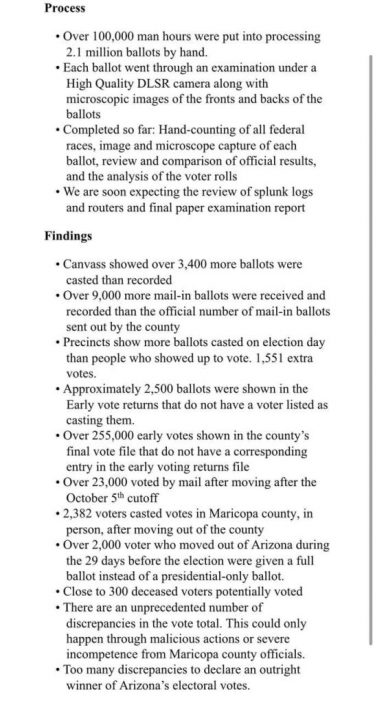 ‘The Election Should Not Be Certified’: The *Real* Arizona Election Audit Report Was Just Released – And It is a Bombshell

Dr. Shiva at AZ Senate Hearing: Over 17,000 Total Duplicate Ballots — Votes By Those Who Voted More Than Once in Arizona — 1.5 Times Biden’s Winning Margin (VIDEO)

Battle Of The Titans In Pennsylvania

OF NOTE: IN THE FRIDAY REPORT IT WAS MENTIONED BY THE LEAD CONTRACTOR, CYFIR FOUNDER BEN COTTON, THAT WA STATE VOTING ELECTION DATA WAS FOUND ON AZ ELECTION MACHINES VIDEO HERE 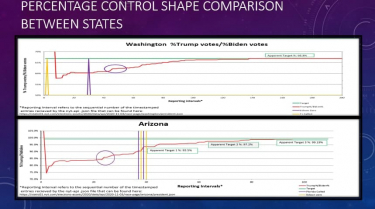 OTHER INFO FROM REPORT:

“Based on these factual findings, the election should not be certified, and the reported results are not reliable.” - Cyber Ninjas’ Draft Report

Roughly 280k ballot images on EMS were missing or corrupt

Log files appear to have been intentionally rolled over†

Database data related to 2020 General election had been cleared†

Some original ballots were duplicated more than once

Software and patch protocols not followed

Unique usernames and passwords not allocated for system credentialing

No baseline for host and network activity

AZ Attorney General, Mark Brnovich, preemptively vowed to take legal action where appropriate: “I will take all necessary actions that are supported by the evidence and where I have legal authority. Arizonans deserve to have their votes accurately counted and protected.”

Despite increase in ballot envelope images, the rate of mismatches decreased from 0.116% to 0.031%

It is important to note that Dr. Shiva did NOT perform any analysis of signatures

“We have captured screen shots of Maricopa County people at the [system] keyboards at that time.” - Ben Cotton (in regard to the revelation that officials deleted data from the EMS)

Elections system computers are internet capable, appear to have been connected to the internet, and used to access the internet