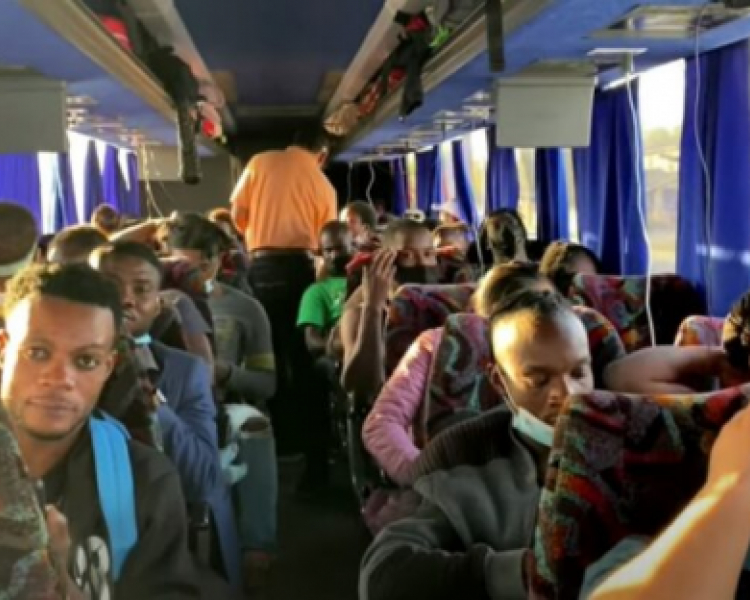 Biden’s border crisis is spreading nationwide, according to a new report from the Center for Immigration Studies. The new administration is pursuing an immigration policy dubbed “catch-and-bus” with the aim of establishing undocumented immigrants in states in the interior of the United States.

The Biden “smuggling routes” have gone largely unreported by media outlets that are fixated on the disastrous border crisis, where children are being kept in unsanitary conditions within detention facilities that violate Covid protocols.

According to an original investigation by CIS, a veritable “conveyor belt” of buses from Texas, Arizona and California are transporting “thousands” of undocumented immigrants into America’s heartland.

“The buses rolling in a steady daily succession out of Del Rio — one charter a day, seven days a week, and before that weeks of filling Greyhound buses — represent a microcosm of a much broader aspect of the unfolding mass-migration crisis at the southern border that has attracted limited media coverage and occurs largely outside public view,” CIS stated. “Tens of thousands of immigrants caught illegally crossing the border and then released under the new leniency policy of Biden are now dispersing to four corners of the United States on buses, with some of the more moneyed ones taking passenger jets.”

“As best as the Center for Immigration Studies can determine from interviews and scattered media reporting, the buses are leaving regularly from Del Rio, the Texas Rio Grande Valley communities, and Laredo, but the busing also appears to be going on in Arizona, as well as in California,” the report continued.

“Where are the buses going?” the CIS rhetorically asked. “They often drop their Haitian, Venezuelan, and Cuban passengers in Florida and New Jersey. Those from Nicaragua and other Central American nations have been delivered to Tennessee, Massachusetts, Indiana, Michigan, North Carolina, Georgia, Kentucky, and to large cities in Texas such as Dallas and Houston.”

The estimates square with other Border Patrol estimates, The Blaze corroborates.

“Todd Bensman, senior national security fellow for the center, estimated that roughly 30,000 migrants who entered the country illegally have been bused directly into the country since the start of the year,” The Blaze reported. “That figure matches Border Patrol estimates TheBlaze reported on earlier this week.”

The Center for Immigration Studies describes the “catch-and-bus” process for many illegal migrants.

“According to Ortiz, Burrow, Border Patrol agents, and several migrants, many turn themselves into Border Patrol voluntarily after their illegal crossings, knowing well the good things that will follow,” the CIS reports. “They are taken to a Border Patrol processing facility on the outskirts of town, where their fingerprints and identifiers are registered.”

“In the first months of November, December, January, and February, no one was getting tested for Covid,” it adds. “But after a public outcry, DHS contracted a private company to conduct Covid-19 tests inside the Del Rio area Border Patrol facility. Every immigrant is now tested, Burrow said.”

“DHS then provides many immigrants with an administrative document titled ‘Order of Release on Recognizance’, which grants them the legal right to be present inside the United States, according to two such documents that immigrants on the buses agreed to share,” the report continues. “These require the immigrants to self-report to a deportation officer in their destination cities by a specific date provided.”

“One Nicaraguan migrant showed CIS a DHS document titled ‘Interim Notice Authorizing Parole’, which grants him a renewable one-year term to live legally inside the country,” the report went on, adding, “Most will likely use their time to apply for asylum, a lengthy, back-logged process that allows for work authorization and Social Security cards during an adjudication process that can drag on for years.”

The Biden “catch-and-bus” policy is an escalation of the Democratic Party’s open borders policy. Even if a state is not on the southern border, an illegal migrant can walk across it and get a free bus ride from the Biden administration to any place it chooses. VIDEO