A Big Congratulations to Ron Muzzall who was appointed Legislative District 10 State Senator, replacing the retiring Barbara Bailey (Video).  Ron is a resident of Oak Harbor, a longtime Conservative and a 35 year business owner of 3 Sisters Farm on Whidbey Island.  Ron was a Fire Commissioner for 11 years and Lieutenant for 5 years at North Whidbey Fire and Rescue.  Ron is very well known in LD 10 and Skagit AG circles, as he was a Board Director for Skagit Farmers Supply from 2002 to 2017. He also was a elected Board Director of the Fortune 200 Company Land O'Lakes Inc. for 9 years, where he served on governance, board performance, audit and political action committees. Senator Muzzall will be running in 2020 against Democrat Island County Commissioner, Helen Price Johnson. 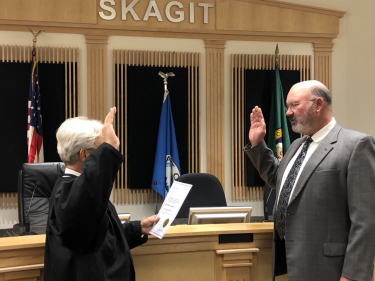 Many of you now know that I am running for 10th Legislative District State House Representative (Pos 2) in 2020.  This decision was made after a month long exploratory committee was formed, and included many meetings, much consultation and prayer.  As a business professional, Chairman of the Skagit County Republican Party and as a former La Conner Town Council Member I have the necessary leadership and governing experience to work well with both sides of the isle in Olympia and throughout Legislative District 10.

I have over 30 years of practical business and management experience and am a longtime Commercial and Residential Property Manager here in Skagit County with a good reputation who is known for producing positive results.  For 15 years I have been a resident of La Conner, and as a Council Member worked on and approved the Town’s budgets and served on the La Conner Parks Commission, Park & Port Committee, the Utilities Committee; and on the Statewide Association of Washington Cities Small City Advisory Committee.

State Democrats have a 57- 41 advantage over Republicans in the House, and the current One-party state Democrat control has got out of hand, is only getting worse and is hurting our citizens.    Electing me will help to bring needed tax relief and accountability back to the legislature and our communities.  I will be working hard for the best interests of the people of the 10th Legislative District, our three counties and the state.  My main priorities will be to uphold the U.S. and state Constitutions, the Rule-of-Law, and to consistently vote to eliminate and lower taxes and cut needless regulations and spending; and exercise fiscal responsibility.  I firmly believe a transparent and limited government is necessary to live in a free society.

I am humbly asking for your support, and am inviting you to the "Elect Bill Bruch for State House" Pre- Campaign Kick-off, which is set for Friday, November 15th from 6 pm to 8 pm at 9570 McGlinn Drive in La Conner (MAP) food and drinks provided.  If you would like to attend or are interested in supporting the campaign please call (360) 820-1700, email bruch4house@gmail.com or visit: billbruchforhouse.com.

It is important to remember that the 2019 WA State Democrat Caucus waited until the very last weekend of the legislative session to pass massive amounts of new last minute taxes, circumventing the normal legislative process.  Additionally on the last day of session Democrats passed I-1000, reversing I-200 (the Washington State Civil Rights Initiative) and the will of the people.  WA state voters approved I-200 in 1998 with 58.22% of the vote, it led to RCW 49.60.400 which states: The state shall NOT discriminate against, or grant preferential treatment to, any individual or group on the basis of race, sex, color, ethnicity, or national origin in the operation of public employment, public education, or public contracting.  The unconscionable, last minute passage of I-1000 minimizes our merit based system and makes sure race is used to decide quotas, and is just one more example of ruthless Authoritarian Socialist government control.  VOTE TO REJECT R-88 on INITIATIVE 1000! 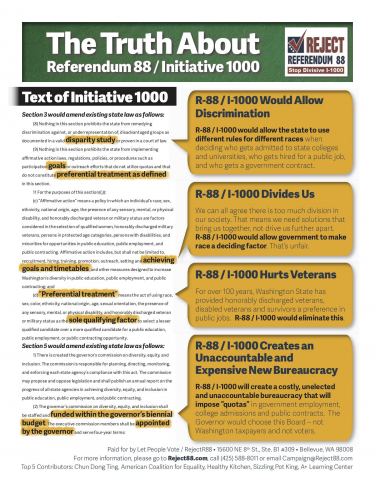 The WA State Democrats in the legislature are working on a Andrew Yang style "Basic Income Bill."  Yes, LD 34 Senator Joe Nguyen and his Democrats cohorts are making plans to take more of your hard earned money to redistribute to "Basic Income Recipients."  Please do not be fooled and understand the only way to pay for this is to increase taxes.

The 2019 WA State Democrats additional costs imposed on taxpayers is coming to fruition.  A few weeks ago the Everett Herald reported that the state Department of Revenue is asking for an additional 4.1 million dollars and 44 new employees to administer the many new added responsibilities created by taxes signed into law earlier this year.  This is just one of the growing government bureaucracy issues that will be part of the 2020 supplemental budget debate. 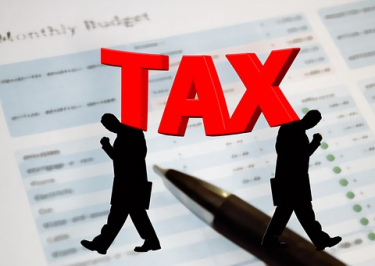 The Seattle City Council recently passed yet another tax, this time on home heating oil.  If the cost of living wasn't enough with all the new taxes, now residents of Seattle are being additionally taxed on heating their homes.  Another typical example of the Democrat Partisan Agenda.

Seattle Public School District officials are talking about implementing a "Math Ethnic Studies" curriculum in their school system.  Asking questions like, "How can we change mathematics from individualistic to collective thinking?"  And "Can you recognize and name oppressive mathematical practices in your experience?"  Very sad to see such a radical subjective framework for the science of numbers.  Math is fact based objective truth, not an opinion.

When the 2019 WA State Democrats voted to pass the new Sanctuary State Law we knew there would be horrible ramifications.  This again became painfully obvious as another senseless act of violence occurred by someone who should have never been in this country,  Rene Maya-Estrada, a known criminal illegal alien, was recently arrested and charged for rape in the first degree of a 17-year-old girl.  The dangerous law prohibits ICE from deporting Maya-Estrada even though he was here illegally, and actually treats him the same as a "DREAMer."  To State Democrats, a DREAMer with no criminal record is owed the same protection from deportation as a rapist.

By deciding there should be no legal difference between the conduct of a rapist and a DREAMer, as it relates to deportation, Democrats are saying very clearly that they care more about criminal illegal aliens than they do American citizens.

The majority party won’t even allow these convicted criminals to be turned over to ICE after they’re released from custody, complying with detainer requests, which puts criminals back on the streets. This endangers us all.  The horrible sanctuary state law bars law enforcement from asking someone about their immigration status unless it’s part of a criminal investigation. It also prohibits local law enforcement from putting someone in jail for 48 hours on an immigration hold, and gives criminals more protections for future crimes.

The law is a threat to public safety and needs to be changed, also it is violation of Federal Law 8 U.S.C. SS 1357 (g) of the Immigration and Nationality Act, and is unconstitutional, Art 1 Sec 8 Clause 4 (Naturalization and Citizenship).  The U.S. Supreme Court has repeatedly held that Illegal Immigration is exclusively a federal responsibility and that state laws and policies are preempted when they conflict with federal Laws.  Of Note: In 2012 the U.S. Supreme Court in U.S. vs Arizona, upheld state legislation that requires state and local law enforcement officers to make a reasonable attempt to ascertain the immigration status of persons involved in a lawful stop when officers have a reasonable suspicion that the person is unlawfully present.

Also AOC has "Prison Abolishment" on her agenda.  AOC's "Prison Abolition" is a proposal popular with the Democrats/Socialists, in general, abolitionists favor abolishing prisons and reducing or eliminating punishment, then replacing them with "restorative justice" and/or social welfare programs.  Of note: The Democratic Socialists of America, with which Ocasio-Cortez is affiliated, passed a resolution at its 2019 convention establishing a "Prison-Abolition" working group.  Offering these criminals government welfare is just rewarding them for bad behavior, and is all just more Democrat driven socialism.

Presidential candidate Beto O'Rourke and other Democrats are advocating that churches that oppose same sex marriages should have to pay taxes.  Lets hope the liberal agenda plan to abolish religious organization's tax exemption status by penalizing certain religious groups does not gain traction.  This would be an outrageous oppression of church by state and a violation of the first amendment of the U.S. Constitution's Establishment Clause, prohibiting the free exercise of religion.

Democrat Presidential candidate Elizabeth Warren has called for placing transgender prisoners in prison and jail facilities designed for the opposite biological sex in a new LGBTQ rights plan.  Under the plan, transgender inmates would be placed in detention facilities that correspond to their gender identity rather than their biological sex; also they would be entitled to tax-payer funded gender transition surgeries.  This is more Democrat recklessness that would put women in needless life threatening situations as they would be forced to be locked up with dangerous (biological) male criminals.

The Democrat New York City government has a new "Human Rights Law" that will fine offenders up to $250,000 "If someone calls ICE when motivated by discrimination, and/or if someone uses a derogatory use of the term Illegal Alien."   It is now considered "Unlawful Discriminatory Treatment" if the governing authorities interpret someones actions as "Motivated by Discrimination."

The fake news media hit an all time low earlier in the week after President Trump announced to the world that U.S. Special Forces had killed the brutal murderer, terrorist and leader of ISIS, Abu Bakr Al-Baghdadi.  The raid in Syria fulfilled “the top national security priority” of the Trump administration in the wake of a Syrian military withdrawal. Then several mainstream media outlets in their nonstop attempts to to condemn Trump, reported that Al-Baghdadi was a scholarly spiritual leader worthy of high praise.

The new 14 mile section of border wall recently constructed at the San Diego sector area is already making a positive impact.  New housing developments are being built just north of the barrier which is spurring economic activity.  The stretch of wall is being described by border agents as a world class security system that will help them do their job much better and much safer.  Other construction along the wall in San Diego continues on a secondary fence which features 30-foot beams. It’s roughly 20 feet north of the primary wall. Construction is expected to be complete in January 2020.  Of Note: It is estimated that Illegal Alien Immigration has cost U.S. citizens over 220 billion dollars in 2019.

The U.S. Armed forces are reporting that they are exceeding goals for recruits in fiscal year 2019.  Military morale and enlistments and are up in 2019 due to "Peace through Strength" messaging, the strong overall economy and financial bonuses being paid to new recruits.  The recruiting growth is a sign of how the armed forces continues to rebuild their ranks after the steep draw down of 2014, which partially continued into 2015.

Thank you and congratulations to LD 18 State House Representative Brandon Vick for his work to bring equitable & quality services to students, ensuring that each student gets the education they deserve.  Brandon has been working on legislation HB 1641 to help students across Washington state.  The Washington Association of Educators of the Talented and Gifted (WAETAG) also just presented Vick with its 2019 WAETAG Advocacy Award.  “Education is not one size fits all, but all students deserve an opportunity to succeed. Successful students help build a stronger workforce and better economy,” said Vick.

The 2020 Skagit County Republican Party Lincoln / Reagan Day Gala is set for Saturday, May 2nd at the Corporate Air Center in Burlington.  The event will feature One America News TV Talk Show Host Superstar and fearless Conservative Liz Wheeler.  Early RSVP discounts are now available before December 31st, $60 per person, $110 per couple.  In 2020 prices are $70 per person and $120 per couple.  For more info click here.

Please don't to forget to vote on or before November 5th! 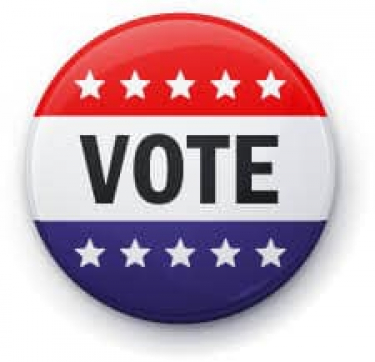