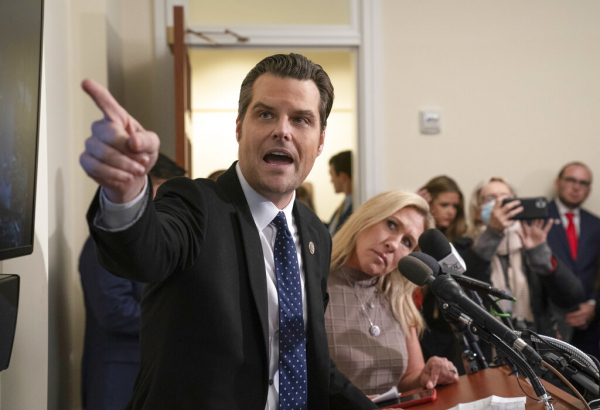 Rep. Matt Gaetz (R-Fla.) and Rep. Marjorie Taylor Greene (R-Ga.) are demanding a federal probe into suspected federal agents and far-left operatives inciting violence before and during the January 6 protest.

In a joint press conference Thursday, the two Republicans said Ray Epps, an Arizona man who has mysteriously disappeared from the FBI’s most wanted list, called for a breach of the U.S. Capitol right before it happened, but hasn’t been charged.

“Ray Epps was originally on the FBI’s list of most wanted individuals after the initial events on January 6, but then the day after Revolver News publishes an exclusive report about Stewart Rhodes, who’s involved with the Oath Keepers, then all of a sudden Ray Epps’ name falls off the list,” Gaetz explained. “We’ve sent letter asking questions about that unexplainable circumstance and the FBI and the Justice Department have given us no illuminating information.”

Both lawmakers reiterated, alleging the federal government is behind the deadly events of January 6. The Republicans added, they have yet to hear a response back for Attorney General Merrick Garland and the FBI’s director surrounding the events leading up to January 6.

Gaetz and Greene asserted that the federal government has a history of infiltrating patriotic groups and Ray Epps appears to be part of those efforts. Additionally, Greene took aim at the way mainstream media covered the events of January 6, including how it has portrayed the protestors.

“I’m not one that’s going to just sit there and take and duck and, you know, hide under cover when the mainstream media and the Democrat Party wants to label people and tell lies,’ she stated. “We’re here because we want to get our in front and say we think there’s real questions that do need to be asked.”

The congresswoman expressed her frustration by saying if Democrats really cared about riots and protests, they would have worked hard to put an end to the Antifa riots back in 2020, but instead contributed to the violence. She then indicated that not one Republican has helped incite violence like the Democrats have.

Furthermore, the Republican lawmakers pointed out none of January 6 defendants have been charged with insurrection or terrorism. They also added, those detainees are subject to inhumane detention conditions in jail.

Moving forward, the Georgia Republican emphasized a transparent and unbiased January 6 Committee is needed to give the American people the truth they deserve.

FBI Refuses To Say How Many Informants Were Involved In Jan. 6 Violence