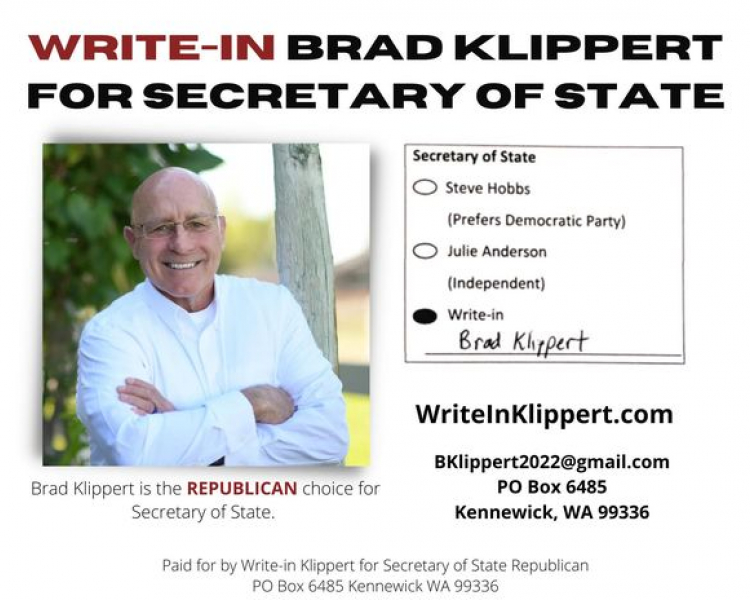 Sept. 29, 2022, Kennewick WA - Republican Representative Brad Klippert has launched a surprise write-in campaign for the office of Secretary of State. No Republican candidates made it past the August primary, leaving Conservative and Independent voters the choice of voting for Democratic incumbent Steve Hobbs or “Nonpartisan” Julie Anderson for Secretary of State. Grassroots Conservatives didn’t like those choices and lobbied Klippert to join the race as a write-in. Klippert said, “I’m honored to answer the call to serve our State and work towards improving our election laws and systems.” Brad Klippert was first elected to public office in 2008 to represent the 8th legislative district and has been re-elected with overwhelming majorities in every subsequent election. Brad is a 7-term State House Representative. He currently serves as the House Minority Vice-Caucus Chair. As a write-in candidate, Klippert’s name will not appear in the voting pamphlet or on the ballot. He’ll be counting on voters around the state to write in “Brad Klippert” for Secretary of State. He opposes ranked choice voting, which has become a hot topic in the Secretary of State race after polls showed 40% undecided voters and strong opposition to Ranked Choice Voting. As Secretary of State, Klippert’s other priorities will include: Improving election integrity, Transparency & Security, ensuring voters are verified U.S. Citizens, making election day a holiday, and working to restore in-person voting. Klippert said, “My years of experience working within the legislature to create laws will help me chart a logical path towards improving our elections for all Washingtonians.”

ALASKA ELECTION: Republicans Received 60% of Vote and Lost the Race to a Democrat with 40% of Vote