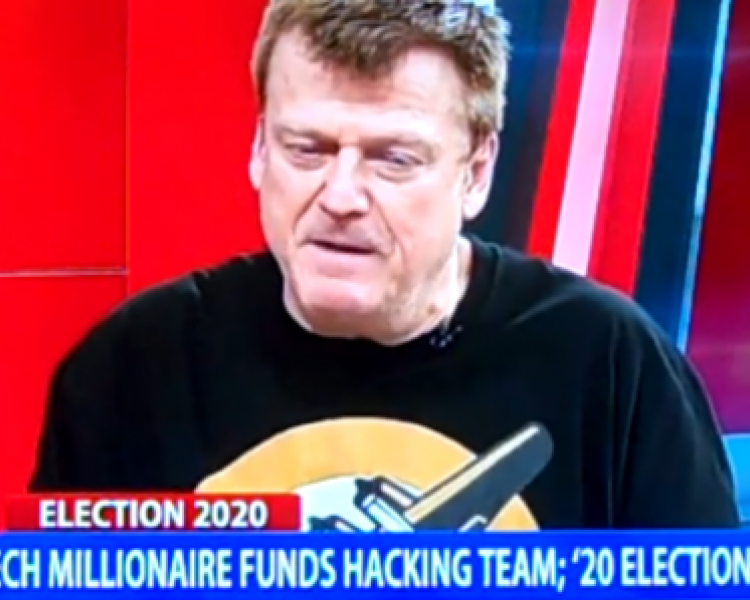 As the media continue to ignore claims of election fraud. One millionaire has set out to prove their cover up in support of the truth. One America’s Chanel Rion has more (video).

Patrick Byrne founder and former CEO of overstock.com has long considered himself a libertarian tech entrepreneur. For now finds himself more than entrepreneur, he’s on a mission to save the Republic, from a deadly virus widespread machine, widespread software election fraud. He’s doing this by funding a niche group of experts and the Trump legal team has been listening,

RION: You’ve put together a group of individuals who are trying to crack down on the fraud that has Dominion, tell us more about what you’ve been doing.

BYRNE: Yes, well I’ve funded a team of hackers and cybersleuths and other people with odd skills. We’ve been on this since August. One side story we’ll pursue one day is DHS was warned of all this in August and September. We tried very hard to….. but it was all crammed down from high levels.

RION: The experts Byrne is funding is an elite cyber security team that has been hired by the state of Texas to investigate a series of irregularities in the Dallas elections in 2018. The team consisted of members with backgrounds in military intelligence and federal law enforcement, for instance, the electronic irregularities in Dallas 2018 was rooted in Dallas as use of Dominion voting machines.

This group has been on Dominion’s trail over two years.

BYRNE: I’ve been up there since without since August and expanding and funding further and deeper investigations. So we really, I felt, kind of had the answer when everyone woke up November 4 and saying, “what happened?”. We couldn’t quite believe we couldn’t get anyone to listen to us.

RION: Their findings include a detailed list of impossibilities Dominion machines processing more ballots than is physically possible. Real time data showing Biden vote dumps that are statistically impossible and dozens of backdoor ways in which votes by the thousands can be changed, manipulated or deleted.

RION: You didn’t necessarily vote, you did not vote for Donald Trump. You are a libertarian

RION: And you are doing this, why?

BRYNE: I never voted Democrat or  Republican or Democrat in my life. This is about the Constitution. These are goons.  If we lose this moment, the Constitution is done. We are never back. We will never have a free and fair election again.

RION: I’ve spoken to your, your guys behind the scenes, they’re very, they seem very knowledgeable and they’ve pulled incredible data and you see a clear pattern between the major swing states in this regard…

RION: Byrne says the lecture was 100% rigged and it’s not just real time data proving this.

BYRNE: We have more more than the data we have the data. We have hundreds of affidavits. We’ve been we’ve also had people gathering and organizing that effort. And we have the, the analysis of the equipment itself so that’s really the three buckets. And we’re getting it out but first feeding it to, you know,  those who want it, which are basically Sydney’s and Rudy’s people.

I want to emphasize we’re not on other team where we’re independent.

RION: To that end, Byrne as a free agent has been feeding his groups, intel and findings to any group who can use it in court against dominion, it’s supporting anyone who wants to data and

BYRNE: I’m putting it up on my own website which is called the deep capture. I’m putting these different stories and facts and write ups on there so anyone can go there and find them. But this isn’t even close I want to show people that this isn’t even close. If you could freeze time and let this all play out through the courts what would be exposed is 100% clear this whole thing was rigged, Video Here.