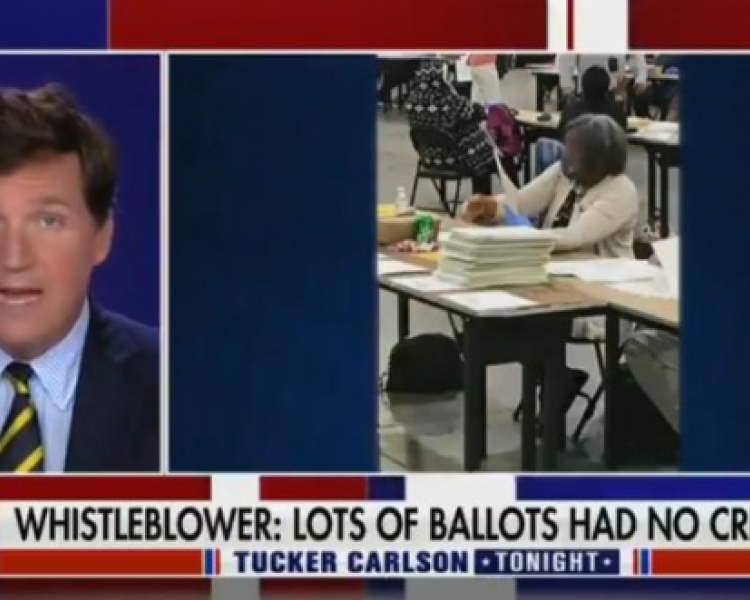 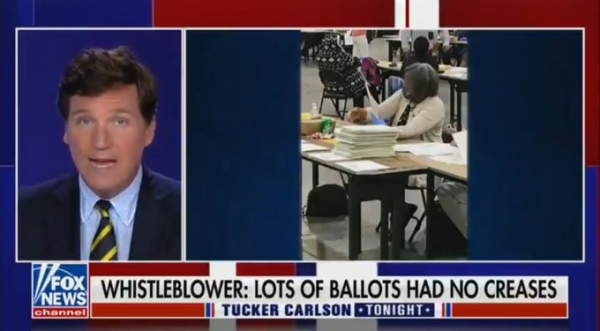 "It certainly sounds like flat-out criminal fraud," said Tucker Carlson. "That is not a conspiracy theory. It's true."

Tucker Carlson detailed the evidence of voter fraud in Georgia during the 2020 election on his latest episode of Tucker Carlson Tonight. Carlson slammed Democrats and election officials in Georgia for lying about the integrity of the election in court to keep the ballots “locked away” in a warehouse. “It now appears that there actually was meaningful voter fraud in Fulton County, Georgia last November,” Carlson said. “That is not a conspiracy theory. It’s true.” (READ MORE: VoterGA Finds Thousands Of Fraudulent Biden Votes In Georgia, Has Photo Evidence Of Falsified Tally Sheets).

Carlson lays out the facts, specifically highlighting the revelation that 36 batches of mail-in ballots in Fulton County were double-counted during the 2020 election. “That’s a total of more than 4,000 votes,” Carlson noted, citing the work done by VoterGA. “The final tally from the double counts, we know about, amounts to more than 3,300 votes for Joe Biden and 865 votes for Donald Trump.”

Carlson pointed out that The Atlanta Journal Constitution, a left wing news publication, independently reviewed the available digital ballot images and concluded that “hundreds of ballots were improperly duplicated.” Carlson then played a clip of a press conference where VoterGA consultant David Cross proved that votes in Fulton County were counted more than once. “So you have the same ballot counted twice in the images and counted in the audit. How that’s possible, I don’t know,” said Cross in the video clip.

“We’re not talking about a couple of ballots here. We’re talking about a lot of ballots, at least hundreds of ballots involved – enough potentially to effect the outcome of the election,” Carlson explained. Carlson included the viral security footage depicting vote counter Ruby Freeman, alongside her daughter and supervisor Shaye Moss, as well as an unknown woman wearing a yellow shirt, appearing to illegally count the same ballots repeatedly through vote scanners after observers were told to leave.

“Pay attention to tape we’re showing you, to the woman wearing yellow at the desk. According to VoterGA, she slides ballots into a scanning machine, removes the ballots, and then reinserts the same ballots. This happens multiple times. The question is, how many times were those ballots counted? Was each vote counted more than once? Fulton County won’t answer that question,” Carlson pointed out.

In the press release, VoterGA states that its “team’s analysis revealed that 923 of 1539 mail–in ballot batch files contained votes incorrectly reported in Fulton’s official November 3rd 2020 results.” The error reporting rates for the 1,500-odd ballots in question is a staggering 60%. Joe Biden was declared the winner of Georgia by the razor-thin margin of 12,670 votes in 2020.

Evidence has reportedly surfaced that shows that as many as 35,000 illegal votes may have been cast in Georgia during the 2020 election, a number that greatly surpasses Biden’s 12,670 vote margin of victory, as National File reported (pdf).

Related: Tucker Carlson speaks on a Bobmshell Report regarding mail-in absentee ballots from Fulton County, Georgia in the Nov. 3, 2020 election