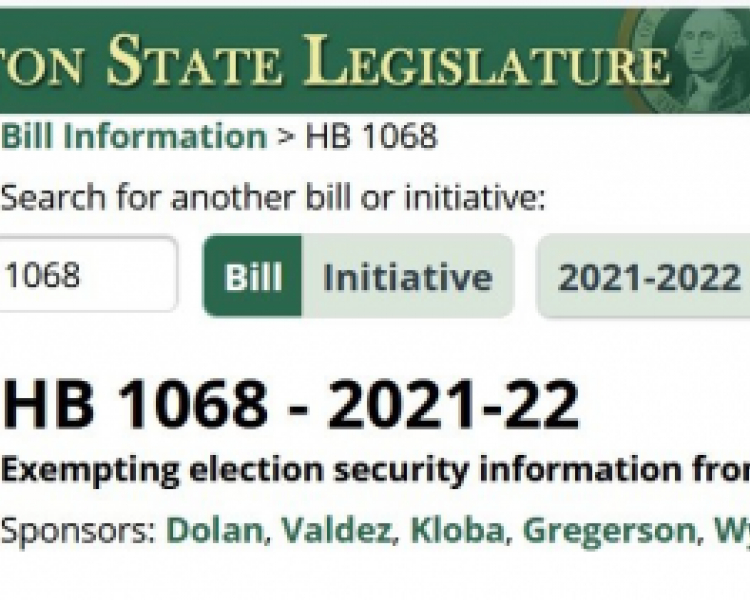 The House in Washington State is proposing a law to make elections less transparent so they can steal them into perpetuity.  They want to pass a bill exempting election security information from public records.

The Democrats in the state of Washington are afraid of being caught stealing future elections like they did the last one.  So they want to make information that comes out of an audit of security reviews and other similar information away from its citizens review.

So it came as a surprise in this year’s election that the current Democrat governor won the gubernatorial race.  The Republican in the race demanded information because the result appeared to be stolen like the Presidential race clearly was:

The Democrats don’t want this to ever happen again.  They never want to be under the microscope for their acts in an election.  So they are proposing Bill HB 1068. The Democrats in charge just have to claim that future supporters of candidates running against their corrupt politicians are terrorists and the fraud in their election will never again be challenged or made public.  And there it is.

While Republicans believe that if they are just nice to Democrats who ignore and support Antifa and BLM everything will be fine, Democrats are busy preventing any future elections from being lost.

You really have to include the ignorance and bitterness of Republicans like Liz Cheney for the upcoming destruction of America.

Americans voted for the most popular President in history.  He wins the election in record-setting numbers.  The Democrats push millions of fraudulent ballots into the election using devices that when audited show they can create ballots and can switch ballots between candidates.  The media, (In)Justice Department, Big Tech, Democrats and Republicans ignore the steal, claim everything is fine and certify fraudulent results.  Liz Cheney and other Republicans that are bitter and ignorant join Democrats in impeaching the President for claiming the election is fraudulent and now Democrats begin their work to ensure no future competitors will ever win.

Meanwhile, those millions of Americans who had their votes stolen become disenfranchised and never vote again.  The Democrats win and implement America-killing fascist controls to place all who disagree with their policies like stealing elections, into little boxes with no job, no money, and no peace.

Welcome to the new America.