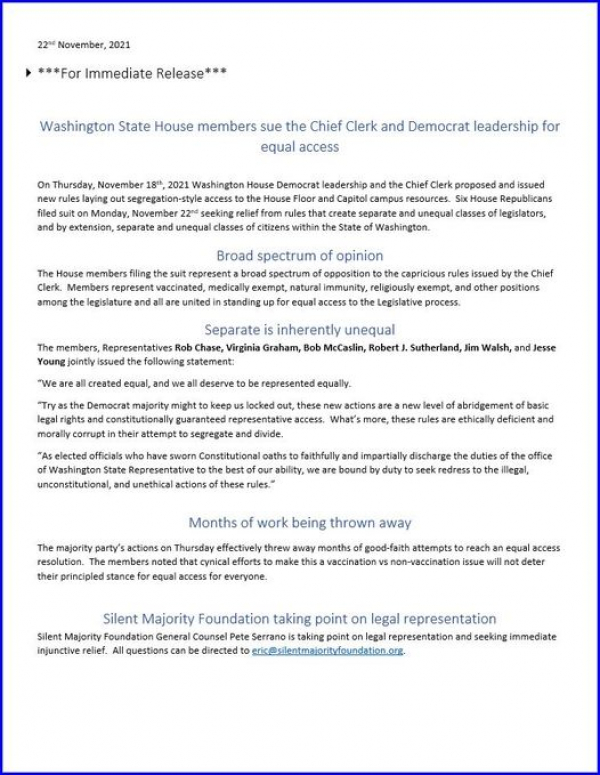 On Thursday, November 18th, 2021 Washington House Democrat leadership and the Chief Clerk proposed and issued new rules laying out segregation-style access to the House Floor and Capitol campus resources. Six House Republicans filed suit on Monday, November 22nd seeking relief from rules that create separate and unequal classes of legislators, and by extension, separate and unequal classes of citizens within the State of Washington.

The House members filing the suit represent a broad spectrum of opposition to the capricious rules issued by the Chief Clerk. Members represent vaccinated, medically exempt, natural immunity, religiously exempt, and other positions among the legislature and all are united in standing up for equal access to the Legislative process.

“We are all created equal, and we all deserve to be represented equally.

“Try as the Democrat majority might to keep us locked out, these new actions are a new level of abridgement of basic legal rights and constitutionally guaranteed representative access. What’s more, these rules are ethically deficient and morally corrupt in their attempt to segregate and divide.

“As elected officials who have sworn Constitutional oaths to faithfully and impartially discharge the duties of the office of Washington State Representative to the best of our ability, we are bound by duty to seek redress to the illegal, unconstitutional, and unethical actions of these rules.”

Months of work being thrown away

The majority party’s actions on Thursday effectively threw away months of good-faith attempts to reach an equal access resolution. The members noted that cynical efforts to make this a vaccination vs non-vaccination issue will not deter their principled stance for equal access for everyone.