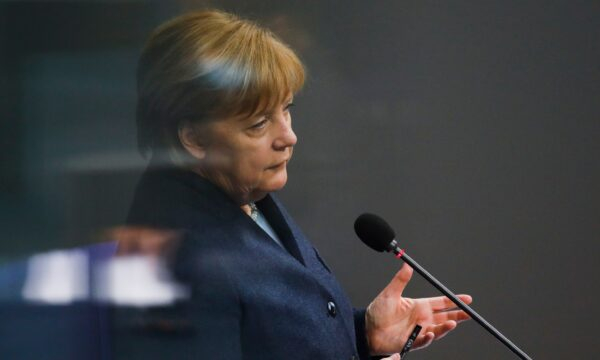 German Chancellor Angela Merkel called Twitter’s ban on Trump “problematic,” and said that freedom of opinion is an essential right of “elementary significance,” her spokesperson, Steffen Siebert, said on Jan 11.

“This fundamental right can be intervened in, but according to the law and within the framework defined by legislators—not according to a decision by the management of social media platforms,” Siebert said.

“Seen from this angle, the chancellor considers it problematic that the accounts of the U.S. president have now been permanently blocked,” he said.

Members of the French government agreed.

Clement Beaune, the junior minister for European Union affairs, said he was “shocked” a private company made this kind of decision.

“This should be decided by citizens, not by a CEO,” he told Bloomberg TV on Monday. “There needs to be public regulation of big online platforms.”

French Finance Minister Bruno Le Maire also condemned the move and said that tech giants were part of a digital oligarchy that was a threat to democracy.

Manfred Weber, the leader of the European People’s Party—a centre-right political party—echoed Beaune and called for Big Tech firms to be regulated.

“We cannot leave it to American Big Tech to decide how we can or cannot discuss online. Today’s mechanisms destroy the compromise searching and consensus-building that are crucial in free and democratic societies. We need a stricter regulatory approach,” he wrote on Twitter on Jan. 11.

He said Twitter needs to apply the same standard globally that it did to Trump.

“This is a line where freedom of expression is also at stake,” said Støre. “If Twitter starts with this sort of thing, it means that they have to go around the world and look at other people completely astray, and shut them out.”

The Australian government has also called the ban on Trump an act of “censorship.”

Acting Prime Minister Michael McCormack said, “There’s been a lot of people who have said and done a lot of things on Twitter previously that haven’t received that sort of condemnation or indeed censorship. I’m not one who believes in that sort of censorship.”

Quoting Voltaire’s famous line: “I may not agree with what you say, but I defend the right to say it,” Frydenberg said that freedom of speech is fundamental to a democratic society.

Fellow Liberal Party member and senator, Alex Antic, said he will push for a Senate Select Committee into Big Tech’s influence and censorship of political ideas when the Australian Parliament resumes next month.

Antic told The Epoch Times on Jan. 12 that he is concerned that Big Tech can so easily censor one side of the debate.

“Our democratic process is founded on our ability to share ideas freely and to be exposed to challenging and opposing viewpoints. It is crucial to the integrity of that process that Big Tech companies do not censor one side of the debate,” Antic said.

Mexican President Manuel López Obrador also echoed his global counterparts, with Reuters reporting that he said it was a bad sign when private companies try to censor opinion.

Obrador said a “court of censorship like an inquisition to manage public opinion.”

In Russia, the opposition leader, Alexey Navalny, who is an outspoken anti-corruption campaigner, said he believed the ban was an unacceptable form of censorship and was based not on a genuine need but rather Twitter’s political preferences.

In a thread posted on the platform on Jan. 10, Navalny said: “Don’t tell me he was banned for violating Twitter rules. I get death threats here every day for many years, and Twitter doesn’t ban anyone.”

He noted that this pattern had been seen before in both Russian and China when big companies utilise their position to become a government best friend and enabler when it comes to state-based censorship laws.

“This precedent will be exploited by the enemies of freedom of speech around the world. In Russia as well. Every time when they need to silence someone, they will say: ‘this is just common practice, even Trump got blocked on Twitter,'” he wrote on Twitter.