It is very clear that the Democrat Operatives in the media simply do not care about the truth, they only care about perpetuating their false narratives. Case in point: Hitman reporter Jim Brunner's recent politically motivated "Hit Piece" article in the Seattle Times (Slimes) aimed at me, the WA State Republican Party and Dr. Douglas Frank, timed for the general election, is another example of the lies the lame stream media are willing to peddle to the unsuspecting public. Instead of being honest in reporting they decided to go the libel / slander route.

It is quite humorous that the Dem Operatives and RINOs keep repeating the lie that 2020 was the most secure election in American history, say there is no evidence of voter fraud (nothing could be more further from the truth), and keep trying to debunk serious Election Integrity efforts. 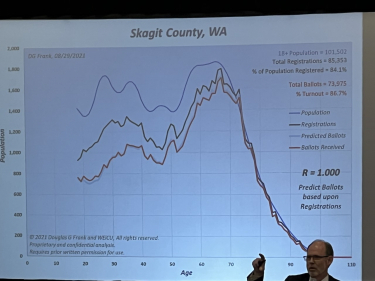 This of course is what mainstream media Dem Operatives do. Case in point, in May 2022 Brunner and another Seattle Times cohort went along with King County Election Integrity Canvassers (WA Voter Research Project) door-to-door volunteers to see what they are finding. That day the canvassing team found several anomalies, in fact anomaly after anomaly (where “voters” that were registered to vote at the address, voted from that address, but didn’t reside at the address). But instead of a fair and honest report, Brunner refused to investigate or report their findings accurately and chose to misrepresent the truth, implying it was crazed Trump supporters bitter about the 2020 election, instead of very concerned citizens trying to help clean the voter rolls finding many serious anomalies. Facts are that the King County Elections Dept. removed hundreds of voter registrations off the rolls from the King County Voter Research Project Report.

OF NOTE: Brunner’s hit piece against Captain Seth Keshel's article, dubbed “How 2020 Election Conspiracies Continue to Fester in WA GOP and Grassroots Conservative Groups,” was written in response to Seth’s appearance with Patriots United, Glen Morgan, and Dr. Douglas Frank in Vancouver, WA, Sept. 8. Seth writes Brunner’s article was filled with mistakes, hasty assumptions, half-truths, contempt, and bias. Jim Brunner has proven, by being incapable of doing the simplest research like clearing up titles and descriptors, that the mainstream media cannot be trusted when determining who should be called conspiracy theorists, lie peddlers, and seditionists.  Sadly, The Seattle Times apparently has such a short supply of military veterans that no one could identify, at the top of an article, that his details were horribly errant.

King 5 TV reporter Chris Ingalls did something similar in September. When he could not find anything of substance to fit their deceptive narrative, Ingalls chose to slice and dice comments and twist them in his hit-piece story aimed at the King County Election Integrity canvassers, who were simply working to help clean the voter rolls and expose the many anomalies in the elections system to correct them.

Continuing on their war path, Ingalls did a new hit-piece Oct 30 (again politically motivated and perfectly timed for the election) aimed at me (he didn't even spell my name correctly) and the Skagit Voter Integrity Project (SVIP) volunteers. Ingalls' report is full of mistakes, twisted innuendos, and interpretations from last September's 2021 Skagit Voter Integrity Project Summary Report, in an obvious attempt to mislead the public and make it look like we are doing Election Integrity Canvassing now.

I stand by my report, and I will continue to be transparent. SVIP Volunteers did the best they could, yes when knocking on thousands of doors and making thousands of phone calls, there may be some mistakes. But the project and the report were done with the highest and best spirit of intent to help clean the voter rolls.

The Skagit Voter Integrity Project (SVIP) was formed in December of 2020 after much voter distrust in the November 2020 general elections. The group was made up of non-partisan grass roots, like-minded citizen volunteers all working together for a common cause and had over 45 committed volunteers. The purpose and mission were to strengthen voter confidence and election integrity in Skagit County by helping to clean the voter rolls, providing honest thoughtful critiquing, and putting forth helpful solutions to all aspects of our county and state election systems; while also advocating to ensure honest, transparent, free and fair elections. IMPORTANT: Several of the SVIP volunteers were "non-partisan" and NOT AFFILIATED with the Skagit County Republican Party, or Any Republican Party organization.

In reviewing last year's source data for the SKAGIT VOTER INTEGRITY PROJECT SUMMARY REPORT (9-30-21), there were several errors reported by Ingalls. First, never in any way did we COMMUNICATE TO THE SKAGIT COUNTY AUDITOR OR ELECTIONS DEPT. THAT THE SVIP REPORT OR SOURCE DATA SPREADSHEET REVEALED WIDESPREAD EVIDENCE OF VOTER FRAUD, OR "DEMAND" THE COUNTY INVESTIGATE ANYTHING. We have always made it very clear that the intention was to help to clean the voter rolls and we have always been very respectful of the county, the Commissioners, Canvassing Board, the Auditor and Elections Supervisor (and I am confident they would all back me up on that).

Chris Ingalls has misrepresented the facts! SVIP Volunteers telephone canvassed (see page 7 0f the SVIP Report), and door-to-door canvassed back in 2021 and were not making decisions or judgments about citizenship, competency, or anyone's ability to vote. These were the volunteers' recommendations to the auditor and elections dept. in a good faith attempt to help clean the voter rolls and make sure the voter rolls were accurate. This was based on Skagit County Registered Voter data and the Volunteers' interaction with the occupant at the household. It is the duty and the right of the people in a free society to question the elections processes and our government. 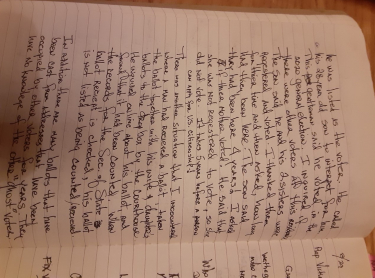 Additionally, Ingalls misinterpreted the source data spreadsheet and made false assumptions and interpretations in his three specific examples of the 3,000. Also, people need to understand that these three examples are very rare exceptions to the findings of the SVIP report. About 95 % of all the anomalies documented were "registered voters" that were registered to vote at the listed address, voted from the address, but did not live at the address.

Of Note: Skagit County Elections have removed approximately half of the 1,632 anomalies off the voter rolls, which we very much appreciate and are grateful for!

P.S. FOR THE RECORD: This evening I received an email from Chris Ingalls that included a statement by the Chair of the Skagit County Democrats:

“The KING 5 TV story indicates attempts by the local GOP to disenfranchise members of our military, senior citizens and people of color,” said Lynn Campbell, chair of Skagit Democrats. “Also, as is happening across the nation, the local GOP is harassing the elections office with fake claims of fraudulent voters.”

My email response to Chris Ingalls:

"I found your reporting lacked the proper information, took things out of context, was not accurate and misrepresented the facts. Additionally, I am extremely offended by the meritless accusations by the Chair of the Skagit County Democrats. It is unfortunate that we can't discuss important issues in our community as colleagues, without Identity politics and political propaganda." 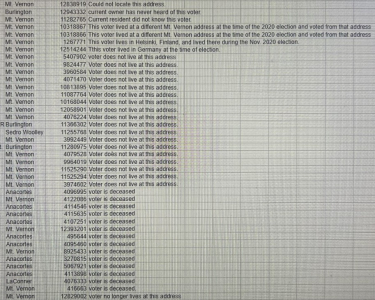